HBOT stands for Hyperbaric Oxygen Therapy, which involves administration of oxygen at pressure higher than atmospheric pressure. It is generally administered in specially designed chambers which helps create ambient pressure higher than that found at sea level to help dissolve oxygen into blood without any major complications, such as bubble formation etc . This increases the amount of dissolved oxygen in blood and thereby enhances the delivery of oxygen to tissues. 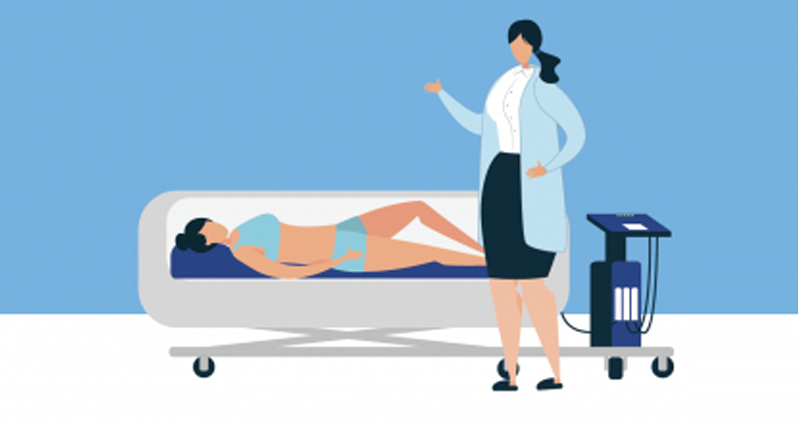 Oxygen is necessary for all the body functions. When we breathe, the oxygen reaches our lungs, diffuses out of the alveolar membrane of our lungs to our body, binds to haemoglobin and then is delivered to the cells where it is used to produce energy. All the diffusion and exchange processes depend on the partial pressure of oxygen.

Hypoxia is a condition in which the tissues of the body do not get sufficient oxygen to grow, maintain and repair themselves. It can be localised to a part or affect the entire body. Hypoxia can be caused due to lung damage, lack of haemoglobin, insufficient presence of oxygen in the environment and many other reasons.

When the tumour grows initially, it takes up a lot of nutrients and oxygen, depleting the surrounding cells of the same. As the size of the tumour increases, the inner part of the tumour does not get enough oxygen. The tumour then alters its growth pathways so that they are not dependent on oxygen anymore. The decrease in the concentration of oxygen leads to various adaptations in the cancer cells.

Hypoxia can also induce angiogenesis (formation of new blood vessels by the tumour to increase the supply of oxygen and nutrients) specifically in cancer cells. It also increases the genetic instability which leads to more mutations, making the cancer aggressive. Hypoxic conditions increase metastasis and make the tumours resistant to chemotherapy as well. As a result, tumours which are present in hypoxic conditions are found to be more lethal for patients.

ROLE OF HYPERBARIC OXYGEN IN CANCER

Hyperbaric Oxygen Therapy is a well-known mechanism to treat Hypoxic Conditions. HBOT involves the administration of 100% pure Oxygen at a particular pressure which is generally higher than the atmospheric Pressure. When given in such a way, it results in the increase in total dissolved oxygen present in our body. This ensures an adequate supply of Oxygen to every tissue which is independent of the availability of Haemoglobin.

It’s a universal fact that oxygen is a non-toxic gas for humans since it’s the basic necessity of life and is involved in various metabolic processes happening inside our body. Even at high pressure, it is considered safe and has minimal complications when used with a correct protocol. Owing to this fact, HBOT is now fully accepted and frequently used at medical centres for the treatment of several diseases which involve Hypoxia, carbon monoxide poisoning and Ischemia. In Fact, there is an organisation known as Undersea and Hyperbaric Medical Society which governs the matter related to Hyperbaric treatment, support research in Hyperbaric Medicine and also issue certificates for qualification to doctors who are trained to use Hyperbaric treatment strategies.

When it comes to cancer, there has been a serious misconception prevailing for a long time.

Generally, Hyperbaric Oxygen is used to treat many disorders by augmenting wound healing mechanisms, angiogenesis, epithelialization and formation and deposition of collagen. But when it comes to cancer treatment, these factors may seem dangerous for a cancer patient and that’s why, it was feared by people for a long time that HBOT may actually help in Tumour proliferation.

In 2000, Feldmeier et al. and Daruwalla et al. performed studies in both experimental and clinical conditions and showed that Cancer cells behave differently than Normal cells when subjected to HBOT. It was thus concluded that HBOT has absolutely no role in the promotion of tumour formation and metastasis.

Oxygen is an important factor for wound healing. It stimulates VEGF, which in turn is responsible for angiogenesis in wound healing. In normal cultured cells, HBO was shown to promote angiogenesis, thus it was also expected that it will promote angiogenesis of cancer cells too, which in turn will promote its metastasis. However, experiments in cancer cell lines showed completely opposite results than expected. It was shown that administration of HBO actually induces anti-angiogenic effects in two mammary tumour models and a glioma model. In 2003, Feldmeier et al. underlined several differences in the actions of normal cells and cancer cells in the presence of HBO.

In a recent study done on murines, where human lung adenocarcinoma cell line A549 were transfected to SCID mice and effects of HBOT on this tumour was studied.  “HBOT not only improved tumour hypoxia but also suppressed tumour growth in murine xenograft tumour models. Platelet endothelial cell adhesion molecule (PECAM-1/CD31) was significantly increased after HBOT. Immunostaining of cleaved caspase-3 was demonstrated and apoptotic tumour cells with nuclear debris were aggregated starting on the 14th-day after HBOT. In vitro, HBOT suppressed the growth of A549 cells in a time-dependent manner and immediately downregulated the expression of p53 protein after HBOT in A549 cells. Furthermore, HBOT-reduced p53 protein could be rescued by a proteasome degradation inhibitor, but not an autophagy inhibitor in A549 cells. Their results demonstrated that HBOT improved tissue angiogenesis, tumour hypoxia and increased tumour apoptosis to lung cancer cells in murine xenograft tumour models, through modifying the tumour hypoxic microenvironment. HBOT will merit further cancer therapy as an adjuvant treatment for solid tumours, such as lung cancer” [1].

However, a recent study showed that, HBOT can induce Mesenchymal to Epithelial transition (MET), which has an antagonising role to EMT, that is these are mesenchymal cancer cells which were moving through lymphatic system and metastasizing in distant organ are forced to turn into epithelial cells and downregulate metastasis.

With the increase in oxygen concentration, hyperoxic conditions dominate in the body. Hyperoxic conditions result in the increase in the level of Reactive Oxygen Species. Increase in ROS leads to the creation of an imbalance in the levels of ROS and Antioxidants. This imbalance results in cellular apoptosis and was found to be completely dependent on the concentration of oxygen and the duration of exposure. It was also revealed that various cell signalling mechanisms were also involved in inducing apoptosis by HBOT which included popular protein kinases and receptors like RAGE, TLR3, TLR4, CXCR2, etc.

In 2007, it was shown by Chen et al. that HBO upregulates several pro-apoptotic pathways like MAPK and downregulated anti-apoptotic pathways like ERK pathway in Hematopoietic cells. Several other studies also proved the apoptosis inducing nature of HBO. But it’s too early to draw a conclusion on the basis of limited research works. Although unregulated administration may cause HBO toxicity, the side effects could be reduced by Hydrogen therapy. You can read more about it in our Hydrogen therapy blog.

HBOT is a popular therapy which has gained approval for the treatment of several disorders related to hypoxia and ischemia. Other than that, HBOT also finds its position in faster wound healing especially, post-surgery. Its wound healing mechanisms makes it a favourable option for Doctors in Plastic surgery.

The research for the role of HBOT in cancer treatment dates back to 1966, when McCredie et al. investigated the effect of HBOT in C3HBA mouse mammary tumours. Despite initial failure in unwrapping the benefits of HBOT in cancer, subsequently, medical sciences have been successful now to unravel the role of HBOT in treating cancer. With new inventions and technology, scientists are now able to make this procedure even more precise and efficient and it has been successfully shown in countless research studies, both experimental and clinical, that HBOT is a safe treatment option which provides efficient measures to limit the growth of tumour cells via various mechanisms in multiple cancer types. However, the exact theories for few effects are still unknown, we hope to see these advancements soon in the area of Hyperbaric Medicines.